I’ve never seen… The Life and Death of Colonel Blimp

The Guardian are running a series in which their film writers confess to longstanding gaps in their cinematic knowledge, and finally fill them. I’ve decided to join in on this blog, hence I’ve-never-got-round-to-it proves a pathetic excuse for missing out on the beloved Powell/Pressburger masterpiece, which Winston Churchill tried to ban. 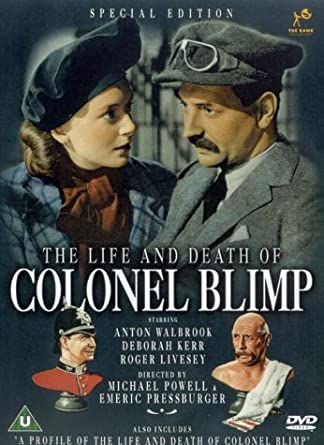 My VHS copy (and later my DVD) sat on the shelf for years, yet despite my love for national treasures Michael Powell and Emeric Pressburger, I didn’t ever find the required two hours and forty-five minutes for The Life and Death of Colonel Blimp. As a teenager I discovered their other classics, and regularly devoured them. A Matter of Life and Death was a romantic, whimsical delight; The Red Shoes magical and heartbreaking; Black Narcissus – my personal favourite – erotic and eerie, with a finale as scary as The Exorcist (despite the U certificate). Yet The Life and Death of Colonel Blimp, which Pressburger considered his greatest work, remained unwatched for decades.

Of course, I’d read about Blimp. I couldn’t pass myself off as a budding film buff and not know the film had once earned the ire of Winston Churchill for its sympathetic portrayal of a German character. When the subject of Powell and Pressburger came up in conversation, I was more than able to bluff my way out of never having seen the film (“It takes its title from the David Low Colonel Blimp cartoon, you know…”). Yet that unwatched DVD gathered dust on my shelf, a skeleton lurking in my cinematic closet like some heinous, unconfessed sin.

When I finally gave it a watch, my first response was to kick myself for having denied for decades the pleasures of what has instantly become one of my favourite films. Blimp really is every bit as good as its reputation. I loved it.

We open in 1940s wartime Britain during a military training exercise (“War starts at midnight!”). Home Guard Major-General Clive Wynne-Candy (Roger Livesey) is in charge of the exercise, only to find himself accosted in a Turkish bath by Lieutenant “Spud” Wilson (James McKechnie), who pre-emptively begins the exercise to illustrate his belief that the Nazis won’t honourably wait for the British to be ready. Candy is outraged, and a slapstick scuffle ensues, resulting in a fall into one of the pools.

A series of flashbacks follow, which as expected contextualise Candy through his prior military career in the Boer War, and World War I. However, I didn’t expect the deep, understated, profoundly moving “bromance” between his character, and German officer Theo Kretschmar-Schuldorff (Anton Walbrook). Candy initially meets the latter as a result of a duel he is honour bound to fight, after going to Berlin to assist Edith Hunter (Deborah Kerr) in her quest to stop German propaganda against the British. The precise circumstances of their meeting, and the outcome of said duel, are too good to spoil for the uninitiated, suffice to say it is the beginning of a beautiful friendship.

Said friendship is complicated by Edith’s budding romance with Theo, as Candy also has fallen for her. He honourably withdraws, burying his feelings in true stiff-upper-lip fashion. Yet he is haunted by her, and in years to come marries Barbara Wynne (also played by Kerr); a woman twenty years his junior, who bears a striking resemblance to Edith.

World War I sees Candy and Theo fighting on opposite sides, but their friendship is rekindled after the war, despite the fact that Theo takes some time to bury his pride. At this point, the film had completely won me over. Although a satire of British military attitudes of the time, especially the much-stereotyped sense of fair play, the warmth and kindness inherent in the story is deeply moving. Perhaps that sense of fair play was only ever a myth perpetuated in British military propaganda, but it is a value embodied by both Theo and Candy, and I can’t help but deeply admire both of them, despite the crushing inevitability that the rise of Nazi Germany is about to trample all over their code of honour.

Which brings me to the most understated and profoundly moving scene in the film. In the run-up to World War II, a desperate and demoralised Theo flees to Britain, in order to escape the Nazis. In a superbly scripted monologue, Theo explains to an immigration official how he refused to move to England when Edith wanted him to, and by the time he was prepared to do so, she had died. He further explains how his children were brainwashed by Nazi propaganda. Anton Walbrook’s subtle performance is nothing less than superb, with every look and facial nuance conveying weariness, loss, and anger at the evil of the fascist regime. The bitter, sarcastic “Heil Hitler” muttered after explaining “None of my sons came to her funeral” is as powerful as anything in Schindler’s List. After seeing this sequence, I finally understood why Emeric Pressburger, himself a Hungarian Jewish refugee who fled to Britain, considered Blimp their best work.

This film is shot through with the beauty of all Powell/Pressburger films, from Jack Cardiff’s gorgeous cinematography, to the deeply humane undercurrents brilliantly brought to life through the leads. Touches of magical realism manifest through the performances of Deborah Kerr, who plays not just Edith and Barbara, but also Candy’s spirited driver Angela “Johnny” Cannon, who he meets during his time in the Home Guard. Theo remarks on her uncanny resemblance to Edith, and eventually Candy admits that he never got over her. Although tempting to read the casting of Kerr as merely a pointed comment on Candy’s repressed, obsessive unrequited love, I couldn’t help but think the filmmakers were also hinting at reincarnation.

The film is dated in some respects. For instance, the passage of time is marked by montages of big game animal head trophies. Whilst they are true to the character, they may feel crass to some viewers today. Yet although Candy is at first glance an insensitive, colonial caricature, his character is much deeper. Despite his flaws, his essential decency is never in question.

Some have speculated Winston Churchill considered Candy a character that directly mocked him, but even if that were true, the affection the filmmakers have for the character is clear in every frame. If that was Churchill’s real reason for wanting the film banned, rather than worries over the sympathetic portrayal of Germans during wartime, he was sadly misguided.

Ultimately, The Life and Death of Colonel Blimp isn’t merely a quaint celebration of old-fashioned British values such as stoicism, honour, or repressed romantic desire. The subversive undertones have a universal resonance and relevance, whether about aging and becoming obsolete, or dismantling prejudice. Today, suspicious attitudes to those fleeing dangerous regimes are more of a raw nerve issue than ever, something the Brexit debate also exacerbated. In that respect, although it sounds insufferably sanctimonious, this film really will rekindle your faith in humanity. I just wish I hadn’t taken so long to discover it.