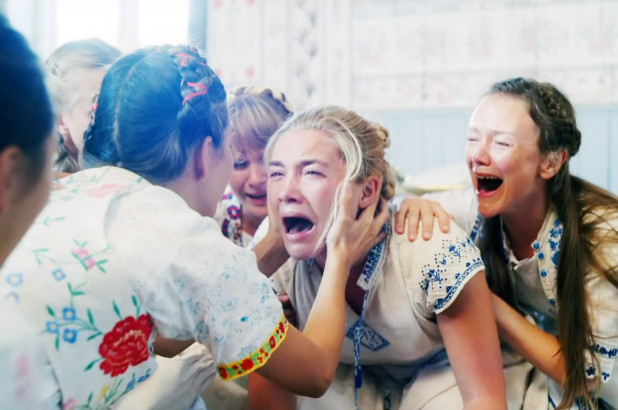 The original version of The Wicker Man is the obvious inspiration for Ari Aster’s Midsommar – a splendidly creepy, disturbing, darkly funny, occasionally gross-out gruesome folk horror tale. It’s a significant improvement on Aster’s Hereditary, which for all it’s fine direction and committed performances, I considered narratively flawed and critically overpraised.

Let’s get the warnings out of the way first: Midsommar is a full-blooded and bloody, properly 18-certificate piece of work, with scenes of sex, nudity, violence, swearing, and folk music, that some viewers may find disturbing. Also for those expecting the cheap jump shocks of so many lesser horror works, be warned that Midsommar is a slow-burn of a film uninterested in delivering conventional scares. The overall tone throughout is weird and disturbing, but the finale does deliver a proper gut-punch that I consider genuinely horrifying on a number of levels. However, this is emphatically not for everyone. Those who prefer their horror more straightforward with less foreplay would be advised to steer clear.

Still here? Great. Because as I said, Midsommar is for the most part something of a triumph. It begins with a life-shattering tragedy for protagonist Dani (the brilliant Florence Pugh). She then decides to accompany her trying-to-find-an-excuse-to-dump-her boyfriend Christian (Jack Reynor) and his friends on a part-research trip to an eerie pagan community in Sweden. Said community are celebrating a mysterious festival that only takes place once every ninety years.

Aster’s genius here is to entire eschew the usual tropes of darkness and shadows in favour of the bright sunshine, greenery, and flowers  of Sweden’s mid-summer near perpetual daylight. This provides an terrific counterpoint to the simmering unease that gradually builds. A remarkable shot during the journey to the isolated community features an upside down shot travelling along a road, giving the viewer a brilliantly disorientating signal that they are, as it were, about to head down a rabbit hole into a very strange world. In fact, Aster’s determination to stake his claim as an auteur is pinned to every frame, including several clever point-of-view shots that communicate the effects of the mind altering drugs consumed by the players.

Upon arrival at their destination, Dani, Christian, and the others are welcomed, although the early warning signs for anyone familiar with the genre are immediately clear. However, as the drama unfolds, the strange thing about Midsommar is that it is less about paganism, and more about a relationship in crisis. The ideal romantic relationship seems to be very much the god or idol that is worshipped above all else in our present age, and the dynamics of Dani and Christian’s interactions are brilliantly played by both actors with this in mind. Christian had already been stringing Dani along for some time prior to the tragedy that strikes during the opening sequence, and when it does he feels he cannot abandon her at that point, so feels trapped. Dani is also trapped in depression and panic attacks, and worries about being too clingy. Yet her arrival in the community begins to bring about a strange and disturbing catharsis. The only question is, how much will she integrate, and at what cost?

Dani’s immersion into the pageantry and rituals of the community stand in contrast with the other members of their group. Some of them are interested purely for exploitative scholarly reasons, and others are present for kicks; notably the character of Mark (Will Poulter), who ogles local beauties and commits a thoughtless faux-pas. The supporting characters and their subplots weave in with the central narrative to good effect, with the screenplay bravely taking it’s time. The film is long (two hours twenty minutes), but never boring. In fact, if anything, I got the sense that in a number of places significant sequences had been removed from Aster’s initial three hours plus assembly cut. I would be curious to see these, if only in a deleted scenes section on a DVD.

For all these reasons, I recommend seeing Midsommar in the cinema on the biggest screen you can find, with the best sound system. Yes, in the end it is still arguably just a variation on The Wicker Man (The Wicker Man: He’s Just Not That Into You perhaps), but what a satisfying and unnerving variation.