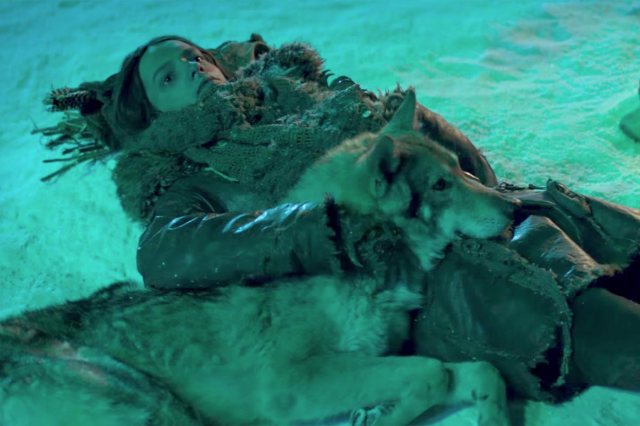 Boy and his wolf stories are hardly new, but director Albert Hughes’s Alpha has plenty of heart, even though it treads a very familiar path of survival adventure and coming-of-age.

Set sometime in prehistoric Europe, the story involves the teenage Keda (a near unrecognisable Kodi Smit-McPhee), who is presumed dead by his father and the rest of his tribe when he falls off a cliff during a stampede in a hunting expedition. However, after being injured and swept away in a flood, Keda begins to make a difficult and painful trek home. Along the way he is attacked by a pack of wolves and after injuring one, can’t bring himself to strike the killer blow. Instead, once the other wolves leave, he takes the injured wolf to a cave and nurses it back to health, bonding with it in the process. The wolf then becomes his companion on his journey, but will they make it back alive?

Despite predictability, there is a genuine sense of jeopardy throughout. There are pleasingly sharp edges to this family-friendly tale. It doesn’t patronise its young audience in the slightest. The brutal, occasionally gruesome business of dirt-under-the-fingernails survival is kept front and centre. In addition, none of the dialogue is English, but a made-up Palaeolithic dialect inspired by Icelandic, Faroese and Danish. So young viewers need to be old enough to read subtitles at least.

Despite such positive elements, I did sometimes get annoyed by obvious CGI sky replacements in certain shots. Other times, the cinematography is suitably, sweeping and epic, particularly in the snowy latter half, when the film isn’t art directed to within an inch of its life. Performances are all decent, including from the very well-trained wolves. There’s also a nice bit of narration at the start and end from Morgan Freeman.

In the end, Alpha is hardly a groundbreaking narrative. I’ve seen better boy and his wolf stories (White Fang for instance). Heck, I’ve seen better girl and her wolf stories (The Journey of Natty Gann), but in a bloated summer of sequels, Alpha is at least not part of a mega-franchise, and satisfactorily fulfils the requirements of the genre. My wolf-obsessed nine-year-old loved it, so really that is recommendation enough.