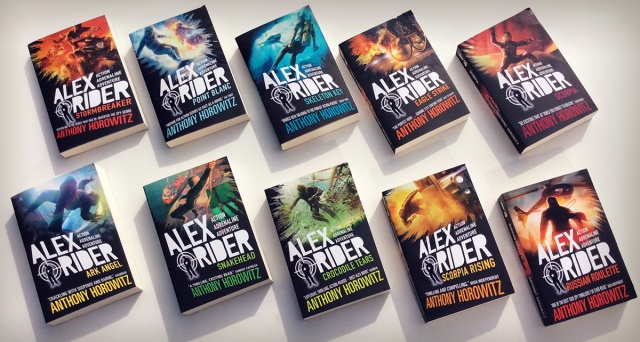 I’m a big fan of Anthony Horowitz’s Alex Rider series. Think teenage James Bond, but without any sex (though there is a hinted-at love interest in the character of Sabina Pleasure). In each novel, loads of globe-trotting action ensues, with memorable villains, cunning plots, fights, chases and gadgets galore. The prose is fast and furious, packed with surely-he’ll-never-get-out-of-this moments. What I most love about the stories is that they don’t patronise children at all. There is a real sense of danger throughout, with deadly consequences for many characters, and some surprisingly dark undercurrents, particularly in the later novels.

Here then is my Alex Rider top five (in chronological order, as opposed to order of merit):

Stormbreaker – The first novel sees Alex join MI6, following the death of his uncle. He is then sent undercover to investigate Herod Sayle, whose school computer giveaway scheme conceals a plan involving a deadly virus.

Eagle Strike – The one with the deranged pop star who wants to destroy drug-making countries by hijacking US nuclear missiles. Damian Cray is a particularly odious villain.

Scorpia – Disillusioned by MI6, Alex almost joins the dark side trying to discover the truth about his father, by joining evil organisation Scorpia. Recurring Russian assassin Yassen Gregorovich plays a key role in this one.

Snakehead – Alex investigates people trafficking (amongst other things) in this grittier instalment which introduces his godfather Ash. Major Wu is another agreeably nasty adversary.

Never Say Die – The most recent novel is an absolutely cracking tale of Alex attempting to discover if someone he previously thought dead is in fact still alive, whilst thwarting a rich kids kidnap scheme in the process. The finale in an abandoned Welsh mine is a standout.