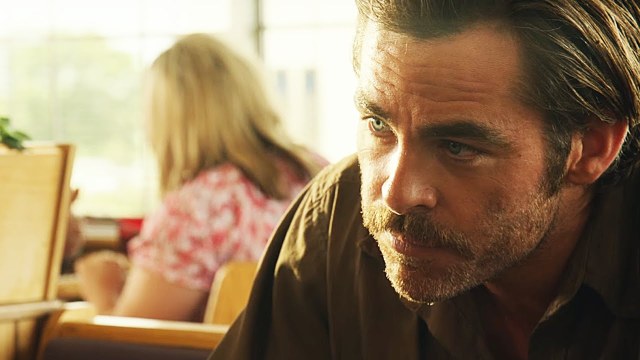 Hell or High Water is a terrific modern western from Starred Up and Hallam Foe director David Mackenzie. For my money it’s his best film to date.

The deceptively straightforward plot concerns Toby Howard (Chris Pine), a divorced father, and his ex-con brother Tanner (Ben Foster), who desperately undertake a series of low stakes bank heists to save their family ranch in Texas. Soon to retire Marshall Marcus Hamilton (Jeff Bridges) and his partner Alberto Parker (Gil Birmingham) are hot on their trail. However, what makes the story special from then on is not so much what happens but how it happens.

For a start, Taylor Sheridan’s screenplay focuses on the touching bond of brotherhood between Toby and Tanner. Secondly, it neatly subverts soon-to-be-retired-cop clichés in the banter between Hamilton and Parker, and in the events of the finale. Performances are all very good, particularly from Bridges and Pine, the latter of whom proves there is more to him than Captain Kirk. Mackenzie’s  choice of stark, run-down locations adds authenticity and pathos to themes of banking greed (banks are ultimately the real villains of the piece). Nick Cave and Warren Ellis also contribute a fine score complimenting the melancholy visuals, courtesy of Giles Nuttgens’s superb cinematography.

In final analysis, Hell or High Water is a rich, mournful, elegiac piece of work that receives a shot in the arm during a tense and gripping finale. I must add the usual warnings for sex, swearing and violence, but nothing is out of context or gratutious. In short, it’s well worth a watch.

This entry was posted in Film Reviews, Films. Bookmark the permalink.